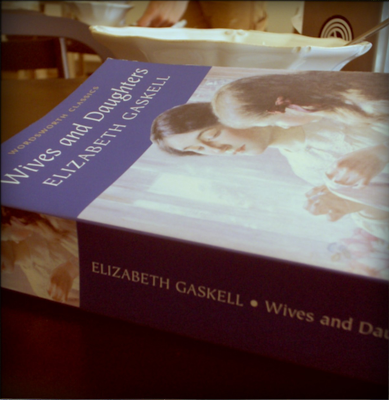 "I had a headache," she complained, "and I should have sent my money, and never stirred out o' doors to-night; for I've seen a many of these here balls, and my lord and my lady too, when they were better worth looking at nor they are now; but every one was talking of the duchess, and the duchess and her diamonds, and I thought I shouldn't like to be behindhand, and never ha' seen neither the duchess nor her diamonds; so I'm here, and coal and candle-light wasting away at home, for I told Sally to sit up for me; and, above everything, I cannot abide waste. I took it from my mother, who was such a one against waste as you never see now-a-days. She was a manager, if ever there was a one; and brought up nine children on less than any one else could do, I'll be bound. Why! she wouldn't let us be extravagant—not even in the matter of colds. Whenever any on us had got a pretty bad cold, she took the opportunity and cut our hair; for she said, said she, it was of no use having two colds when one would do—and cutting of our hair was sure to give us a cold. But, for all that, I wish the duchess would come."
"Ah! but fancy what it is to me," sighed out Mrs. Gibson; "so long as I have been without seeing the dear family—and seeing so little of them the other day when I was at the Towers (for the duchess would have my opinion on Lady Alice's trousseau, and kept asking me so many questions it took up all the time)—and Lady Harriet's last words were a happy anticipation of our meeting to-night. It's nearly twelve o'clock."
Every one of any pretensions to gentility was painfully affected by the absence of the family from the Towers; the very fiddlers seemed unwilling to begin playing a dance that might be interrupted by the entrance of the great folks. Miss Phœbe Browning had apologized for them—Miss Browning had blamed them with calm dignity; it was only the butchers and bakers and candlestick-makers who rather enjoyed the absence of restraint, and were happy and hilarious.
At last, there was a rumbling, and a rushing, and a whispering, and the music stopped; so the dancers were obliged to do so too; and in came Lord Cumnor in his state dress, with a fat, middle-aged woman on his arm; she was dressed almost like a girl—in a sprigged muslin, with natural flowers in her hair, but not a vestige of a jewel or a diamond. Yet it must be the duchess; but what was a duchess without diamonds?—and in a dress which farmer Hudson's daughter might have worn! Was it the duchess? Could it be the duchess? The little crowd of inquirers around Mrs. Gibson thickened, to hear her confirm their disappointing surmise. After the duchess came Lady Cumnor, looking like Lady Macbeth in black velvet—a cloud upon her brow, made more conspicuous by the lines of age rapidly gathering on her handsome face; and Lady Harriet, and other ladies, amongst whom there was one dressed so like the duchess as to suggest the idea of a sister rather than a daughter, as far as dress went. There was Lord Hollingford, plain in face, awkward in person, gentlemanly in manner; and half-a-dozen younger men, Lord Albert Monson, Captain James, and others of their age and standing, who came in looking anything if not critical. This long-expected party swept up to the seats reserved for them at the head of the room, apparently regardless of the interruption they caused; for the dancers stood aside, and almost dispersed back to their seats, and when "Money-musk" struck up again, not half the former set of people stood up to finish the dance.